Last month, EMBARQ (a project of the World Resources Institute) released From Here to There: A Creative Guide to Making Public Transport the Way to Go. For many transit agencies, it seems as though while operating a transit service comes naturally, talking about it does not. Yet marketing, branding, signage (and more!) are all essential components of a transit service. EMBARQ's guide helps transit agencies understand not only what they need to do, but also why they need to do it:

FICTION Branding and marketing by a transport agency is government propaganda, something to be avoided.
FACT Increasing transit use has tangible benefits for all. If an agency is nervous about marketing its service, then it should never have invested in the service to begin with.

One of the aspects the report covers (among others) is signage—the topic of this post. Signage systems, along with other forms of passenger information, "help all riders—no matter their ability, age or literacy level—navigate [a transit system] with ease." Yet many transit agencies seem to struggle with signage. Transport for London, for example, has crafted an excellent set of design standards and managed to implement them across a vast and diverse transit system. But for some transit systems, merely bringing a signage system to fruition seems to be a problem; they hire a designer and start a comprehensive redesign only to get stuck in the pilot stage.

Two cases that come to mind in particular are the CTA's Frankle-Monigle signage system, and the TTC's Paul Arthur signs. Neither were ever extended beyond the pilot stations at which they were initially installed. Both transit systems therefore continue to suffer with their existing signs (which can't really be called a 'system', lacking any coherent design). But suppose you're a small transit system, starting up a new service. You follow EMBARQ's guide, hire a designer (and actually listen to what they say), and get a functional and usable signage system installed. What next?
That brings me to the title of this post: sustaining signage systems. It seems that merely getting a signage system out of the pilot stage is not good enough; it's imperative to sustain the signage system. Transit systems change; circumstances change. 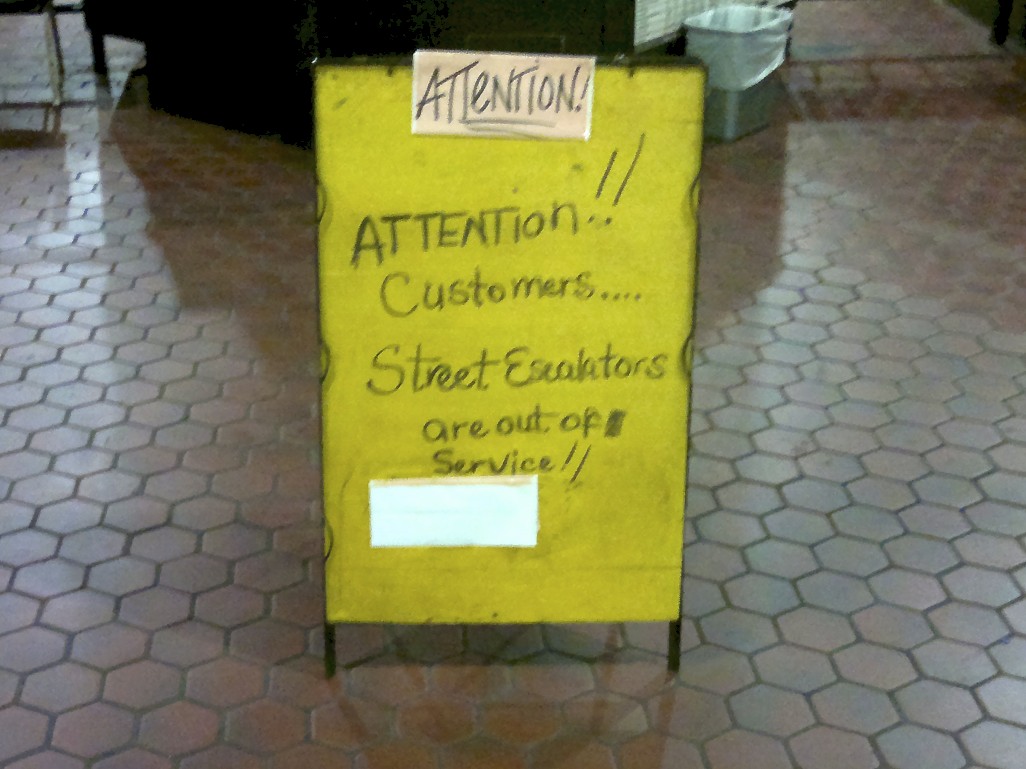 How do we fix this? First, it's vital to recognize that a signage system is a living thing; it requires upkeep. You can't hire a designer, install a bunch of signs, and call it a done deal. Signs must be replaced when they deteriorate and when the information they convey changes. However, while this works well enough for permanent signs, some information changes too quickly for a permanent sign to be made each time. What about short-term disruptions, reroutes, etc?

Paradoxically, the answer might be to actually embrace handwritten signs. This is what the London Underground has done; every station has whiteboards available, and CSAs get explicit instruction in using them. It's a more flexible, more agile solution than trying to design and print signs on short notice for a wide variety of situations. Because staff are specifically trained to present service updates, the quality is often considerably better than what you see on most transit systems with handwritten signs; some CSAs really get into it. (More examples of London Underground whiteboards can be found here.) In this way, handwritten signs become systematized; they are, in a sense, incorporated into the signage system in the same way as a permanent sign from the sign shop.

Will that strategy work for every transit system? I doubt it. It works for those transit systems that have high expectations for their front-line staff. Those systems are thus able to rely on locally-produced signage, and locally-originated PA announcements to keep riders informed. By contrast, on transit systems where station staff are more likely to be verbally abusive towards riders, I would (obviously) not expect to see the same quality of locally-produced signage.

If station staff cannot be relied on to help in the process of communicating with riders, then the other alternative (albeit a more expensive one) is dynamic digital signage. Digital displays can be updated at a moment's notice, and they can be driven centrally. A single operator can update dynamic signage in every station, with no need for individual station staff to be involved in the process. A designer can put together a graphic, send it in, and it can be instantly transmitted across a transit agency's network for display in every station. MTA New York City Transit has adopted this model with their Station Advisory Information Display program, in which digital displays are installed in stations to convey information to riders on service status and disruptions. The displays don't rely on individual station agents to keep them up-to-date, so they're more likely to give riders good information. The trade-off, of course, is that they're not cheap. The displays themselves are expensive, and providing power and data connectivity at each location is also expensive. Such displays can also be equipped with speakers; in contrast to traditional PA systems, digital recording and transmission make it possible for announcements to be crisp, clear, and intelligible. (This is, incidentally, an important point on accessibility: even the best signage system is mostly inaccessible to the visually impaired, and good announcements play a huge role in communicating with riders.)

Regardless of the specific approach taken, the point is this: signage systems must evolve. Transit agencies must be able to react quickly to changing conditions and make sure that signage is kept current, regardless of the method used. This applies to both permanent signs, like those listing bus and rail routes, and temporary signs, advising of short-lived disruptions (a rerouted bus, or an out-of-service escalator or elevator). Underlying all of that, though, there must be a coherent signage system. It is not sufficient to hire a designer and then ignore their work, or half-implement it; you must have a coherent and well-designed signage system which encompasses the furthest points of your transit network. Once that is done, though, you must maintain it, because a sign which misinforms riders is even more of a failure than no sign at all.